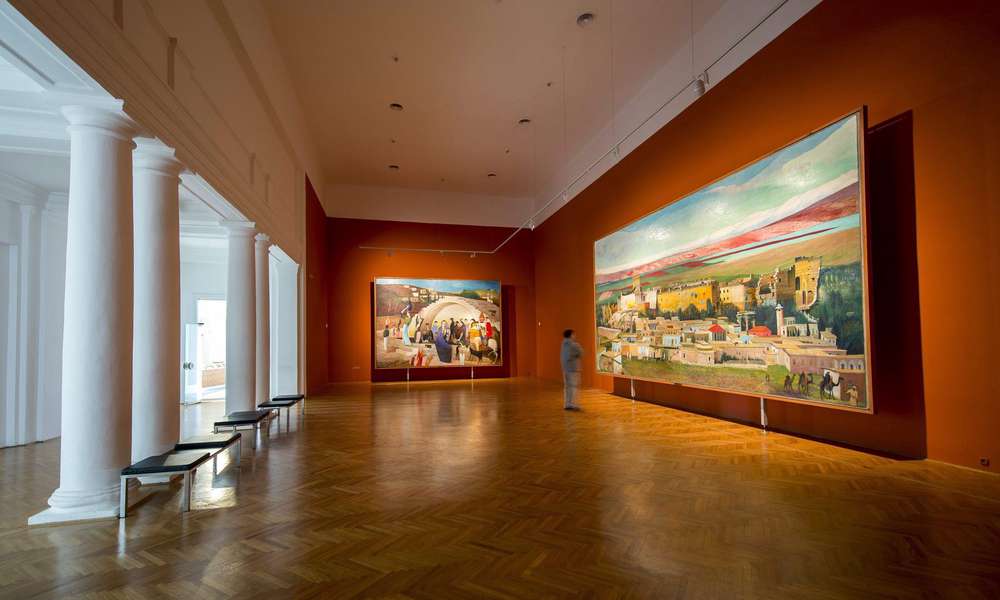 The permanent exhibition of the works of Tivadar Csontváry Kosztka (1853-1919) have been on display in this neo-renaissance building since 1973.

The solitary talent of the turn of this century artist, originally a pharmacist, is the most prominent representative of plen-air. In his oeuvre there are early study drawings, portraits (Maroccan teacher), Bible related paintings (At the entrance of the wailing wall in Jerusalem 1904, Mary’s well in Nazareth 1908) historical pieces (Zrínyi’s last sally 1903) and landscapes View of Selmecbánya 1902, Storm on the Great Hortobágy 1903) as well.

The oeuvre of Csontváry can be well distinguished chronologically and gender-wise. Csontváry’s first artistic period is characterized by studies and portraits. The next period contains works of art by Csontváry from 1902 to 1903 in Jajca, Mostar, Castellamare, Selmecbánya, Szigetvár and Hortobágy. The largest plein art painting in the world named “Baalbek” is on show at the Csontváry museum. Another notable work, “Maria’s Well in Nazareth” is the result of Csontváry’s search of individual voice. The paintings “At the Entrance of the Wall of Laments in Jerusalem” and the “Great Tarpatak in the Tatra” reform the conventional approach to landscape painting.

These masterpieces are almost without exception ripe works, the most notable paintings by Csontváry. The “Lonely Cedar” often considered the self-portrait of Csontváry, is moreover a metaphoric summation of his oeuvre. The “Horse Ride by the Seaside” he painted in 1909 is the oldest of the works on display. The coal drawings and allegorical scenes, composition sketches characterise Csontváry’s last artistic period.